Esslingen, 04 November 2020 – He was one of the biggest entrepreneurial personalities and shaped the successful development of the leading international automotive supplier Eberspächer. He held his employees in high esteem and personal contact was the focus of his work throughout his life. Hans Eberspächer, long-time Managing Partner of the Eberspächer Group passed away on 28 October 2020 in Esslingen at the age of 87.

Born in 1933 in Essen, the son of Dr. Richard Eberspächer moved to Esslingen in 1935. Following the premature death of both his father and grandfather, in 1950, as a schoolboy of 17, Hans Eberspächer became a company shareholder. After attending business college and training as an industrial clerk, he began studying business administration and earned his degree from Ludwig Maximilians University Munich in 1961. He deepened his knowledge during his employment at two German companies. From 1963 he worked in North America for VW in Canada, AP Parts in Toledo, USA, and Ford in Rawsonville, USA. It was there that he met his wife Rita whom he married in 1965. He returned to Germany in that same year, the 100th anniversary of the Eberspächer Group, and in 1966 he took over the management of the company alongside his two uncles, Walter and Helmut Eberspächer. Later, he led the company together with Dr. Günter Baumann, the son-in-law of Helmut Eberspächer, for over 35 years until his retirement in 2001.

Hans Eberspächer made his mark as a manager through the expansion of the group of companies to a worldwide leading automotive supplier in the areas of exhaust technology and vehicle heating. He increased the revenue from around 50 million Euros in 1966 to more than 1.6 billion Euros in 2001. The number of employees doubled to over 5.200. Despite this enormous growth, personal contact with his employees was particularly important to him. He held each individual in high esteem, had an open ear for the concerns of his employees and was regularly present at the production facilities.

Among his greatest achievements was the establishment of an exhaust system production plant in South Africa as well as the development and production of catalytic converters. Further fruits of his labor, which still have an impact today, were the construction of a development center in the USA as well as entering the electrical heater business. The latter are now increasingly being used in vehicles with hybrid and electric drives.

Passion and commitment to the company, combined with the virtues of a reliable and honorable businessman defined his life's work. This is underlined by the fact that until 1997 he assumed personal, unlimited liability for the rapidly growing company. His actions were characterized by meticulous and conscientious work, and at the same time he liked to surprise those around him with his witty sense of humor. Always focused on the success of the company, he acted reliably and modestly behind the scenes. For his exemplary corporate personality, he was awarded the "Gründerpreis Lebenswerk" (Founders Lifetime Achievement Award) by the Sparkassen Finanzgruppe Baden-Württemberg in 2009.

As a horse-lover, his greatest passion was equestrian events. For over 20 years , he successfully participated in show jumping events, winning twice the Württemberg Masters. Hans Eberspächer was particularly passionate in his support of the Esslingen Riding Club and assisted up and coming young riders in their training and competition activities.

Hans Eberspächer was a family man and placed great importance in spending time with his family and passing on his knowledge, despite his numerous business commitments. At the time of his death, he had been happily married to his wife Rita for over 55 years. He prepared the transition to the next generation of the family business, his son-in-law Martin Peters, in an exemplary manner and carried it out with extraordinary discipline.

About Eberspaecher:
With approximately 10,000 employees at 80 locations worldwide, the Eberspaecher Group is one of the automotive industry’s leading system developers and suppliers. The family business, headquartered in Esslingen am Neckar, stands for innovative solutions in exhaust technology, automotive electronics and thermal management for a broad range of vehicle types. Eberspaecher components and systems provide more comfort, greater safety and a cleaner environment on or off the road. In 2019, the Group generated revenue of more than 4.9 billion euros. 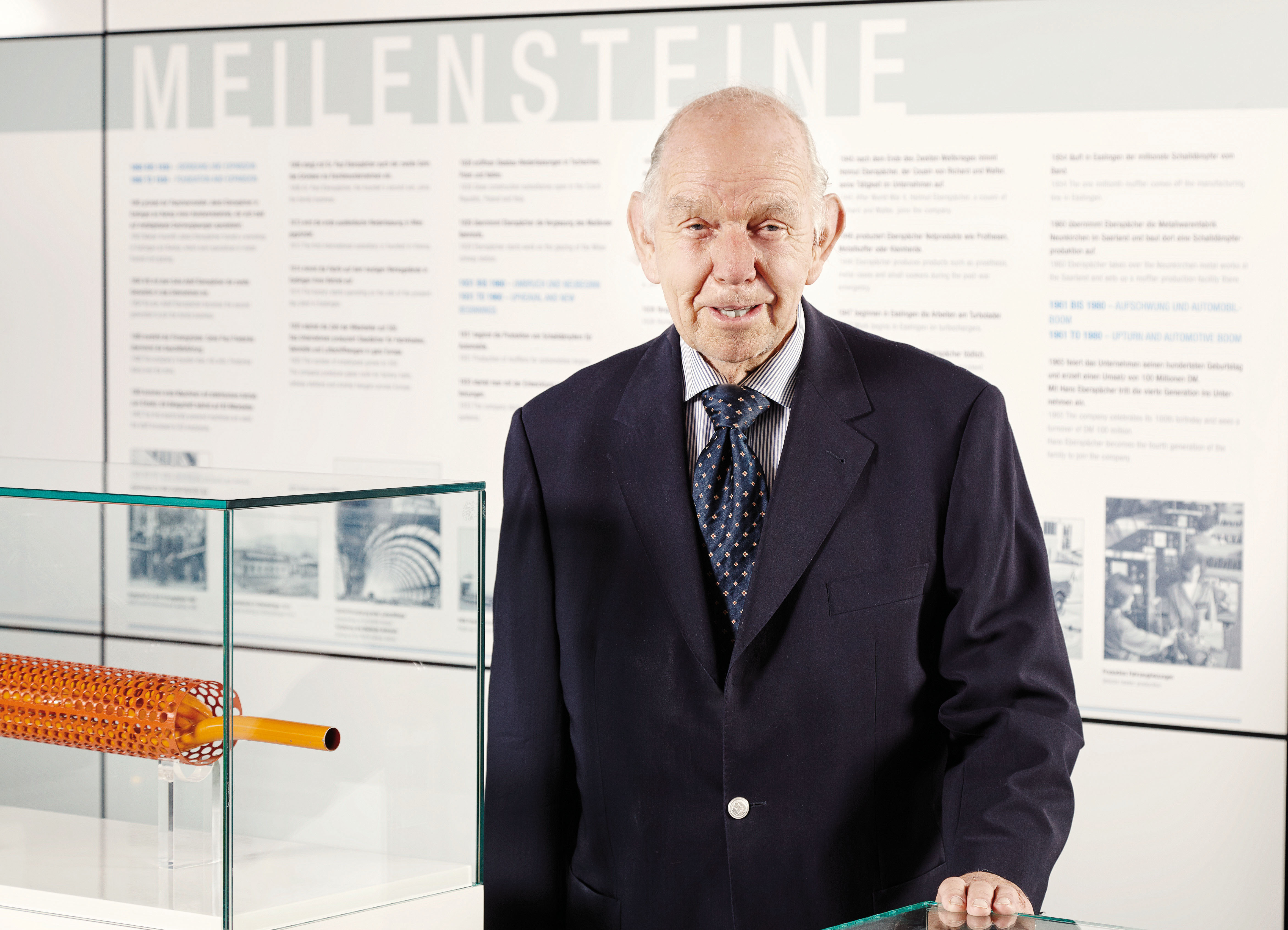